Laurence Perratzi is a figurative artist exploring the body’s expression. Inspired by her athletic background where poise and balance are paramount resulting her work being a reflection on strong movement.

The figures challenge gravity with subtle poses or sometimes snapshot of body in action.

In the circle series, the figure is using the latter as a frame, a support or an accessory. Again, Laurence is continuously researching for movement, lightness, energy and spontaneity in contrast with static poses often represented in sculpture. Pinarello, currently being exhibited at Berkeley Square House, Mayfair shows exactly how she achieves a feel of weightlessness in her sculptures.

ARTful will be showcasing Pinarello until July 2014. Currently in the North reception of Berkeley Square House located on Bruton Street. 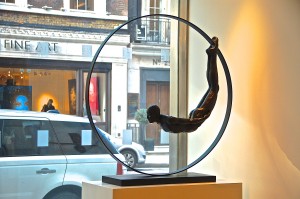