ARTful are delighted to present 2 sculptures by sculptor Paul Vanstone for 40 Portman Square. As part of their art programme, we are proud to present two torso’s on display for the next six months.

Vanstone studied sculpture at Saint Martin’s School of Art going on to obtain an MFA at the Royal College of Art in 1993. Following his graduation Vanstone worked in Italy at the traditional marble carving studios near the famous Carrera quarries. He also spent time working in Berlin and has travelled to Rajasthan to learn India’s traditional marble carving techniques. On his return to the UK, and for the next five years, Vanstone became an assistant to leading British sculptor, Anish Kapoor. 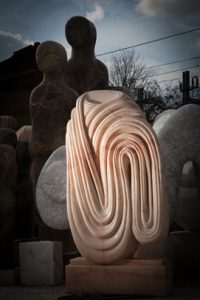 Vanstone has also received several awards and commissions, including the Darwin Scholarship in 1990 and the Henry Moore Award in 1991, and has twice received the Lord and Lady Carrington Sculpture Garden Commission in 1991 and 1996.

Since then Paul has shown his work at a number of major galleries in London, including the British Museum and the Victoria and Albert Museum, as well as galleries and sculpture gardens throughout the UK. Amongst his commissioned sculptures are those of Derek Dooley and Joe Shaw at Bramall Lane, Sheffield and of Lawrence Dallaglio.

Emerald and Egyptian Torso will be on display at 40 Portman Square, W1H, 6DA until 20th September 2017. For an appointment to view or any further information contact info@artful.org.uk or call 0208 702 8030.