Nic Fiddian-Green does not require much of an introduction. Known all over the world for his colossal horse heads, Nic specialises in the life like models working primarily in bronze and beaten lead.

Fiddian-Green was educated at Eton College and onto a foundation-course at Chelsea College of Arts and it is whilst he was studying at Chelsea College of Arts that he was sent on a visit to the British Museum for inspiration. It was at the British Museum when Nic first saw the Elgin Marbles and the Selen Horse taken from the east pediment of the Parthenon. He describes it as “one of the most beautiful objects he’d ever seen. Shortly afterwards, he began to make works of similar subjects.

The encounter paved his future and immediately became his benchmark and for the past 30 years, Fiddian –Green has focused on capturing the beauty of a horse’s head.

His work is shown regularly in London, New York and Australia and has collectors all over the world as well as pieces on display such as a 35ft tall Still Water at Marble Arch.

ARTful have installed Mighty Head in the reception of Berkeley Square House, Bruton Street, Mayfair, W1J courtesy of  Sladmore Contemporary . Not to be missed and will be on display until January 2016. 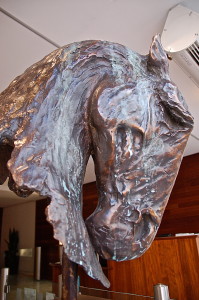 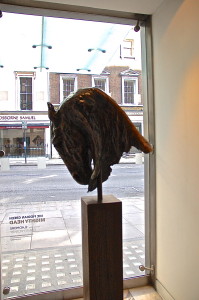