ARTful are thrilled to be showcasing the work by Sculptor John Williams for the next exhibition at Berkeley Square House W1J in January 2016.

John’s works are incredibly engaging and in particular his self portrait pieces. They instantly draw the viewer into their powerful presence leaving you wondering what the deeper meaning behind them really is. John has a magical way of portraying his subjects and we had the pleasure of meeting John at his North London Studio where we got to know him a little more. Here’s what he had to say.

How and when did you first become seriously interested in art?

When I was about fourteen years of age (to my parents’ horror).

What artists or professionals have been your biggest influences?

I had a friendship by correspondence with Ralph Brown RA and have been mentored by Glynn Williams (head of Sculpture at the RSA) through the RBS, both of whom also had quite a big influence on my work.

What do you try to express in your work?

The human condition. Most of my work is autobiographical in some way. I use the human figure as a vehicle to express my ideas. I rarely work life-size. I often try to create a psychological space that the viewer feels compelled to fill or complete themselves.

Which is more important to you, the subject of your sculpture or the way it is executed?

They are both of equal importance. The making or ‘craft’ element of my work is very important to me.

Which artistic project are you most proud of?

A sculptural walkway consisting of six sculptures for the entrance to East Barnet School in North London. This has taken several years to complete. I have been overwhelmed by the positive response of the pupils and staff. It is seen daily by a huge number of people and hopefully has a positive impact on their day on entering and leaving the school. It is where my late parents taught and where both my late brother and I attended. It has been great to have the opportunity to complete such an extensive project for such a good cause. 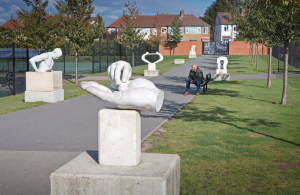 What memorable responses have you had to your work?

A lady, who was terminally ill, bought a sculpture of mine that her husband had admired at an art fair. It was a thank you gift for having stood by her and supporting her so lovingly through her illness. They came to the studio together to surprise him. It was incredibly moving.

What have you been up to in the last five years?

I had to do a bit of teaching when the twins arrived and I have been working on the sculptural walkway for the school. I have recently returned to full-time sculpting so am experimenting a lot and developing my work which is evolving rapidly.

Where do you create your work?

I built myself a studio at the bottom of my garden in Barnet. 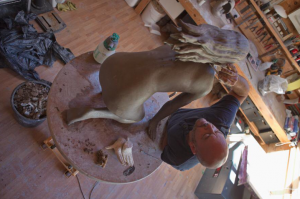 What excites you about showcasing your artwork through ARTful and in a more corporate environment?

The ‘footfall’! The sheer number and variety of people that will get to see my work. Many of those people will be influential in the Art World because of the location and the nature of the surrounding businesses. I find it exciting that sculptors can exhibit work in non art venues with a variety of individuals coming to contact with my work. It offers great exposure and a different platform to promote my work.

‘Sleeping Father’ will be on display in the North Reception of Berkeley Square House, Bruton Street from January 2016-July 2016. Not to be missed.

By ARTful|December 4th, 2015|News|Comments Off on John Williams
ARTful