We are thrilled to be working with Jill Berelowitz and who is presenting two new sculptural works in the main atrium of Berkeley Square House, London, until January 2016. The two works titled DNA Tree and Moving Forward are fine examples of one of London’s most engaging artists’ oeuvre.

For Berelowitz the power of a tree is drawn from the earth. This is a literal and yet very spiritual interpretation of nature that is borne out of her upbringing in a medical family in South Africa. In DNA Tree she is addressing the scientific reasons behind the strength and purpose of a tree by superimposing the readily recognisable structure of DNA over the natural tree form forcing the sculpture upwards away from the earth. The result is a dramatic assemblage of vertical trunks and interwoven branches that erupt at the top as a prescient symbol of the creative potential of genetics. As well as addressing the future in Berelowitz’s words genealogy also provides “a link to the beginnings of life” and in particular to a notional Adam & Eve who existed when homo sapiens first emerged in Africa millennia ago. To this extent the branches in DNA Tree are largely made up of conjoined human figures that seemingly dance through the history of the tree’s growth flowing up from a round base, which Berelowitz describes as emblematic of the “circle of life”. 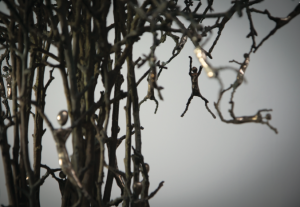 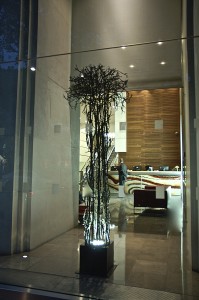 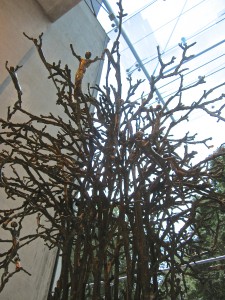 Also installed at Berkeley Square House is an arrangement of the sculptural group called Moving Forward. The work combines varying numbers of sleek humanoid forms in an unflinchingly positive work whose title enforces this fact. There are a number of different compositions mostly using only two figures but each work is unique and this variation contains seven casts. The humanoid figures are cast individually with no two alike and their gender is implied, if not explicit, this allows the relationships between each figure to be hinted at and for the viewer to perceive the dynamics of the group in their own way. Berelowitz further relinquishes a lot of the control she has as the creator of the work, handing it over to the viewer by allowing the figures to rotate on their bases and be physically interacted with as well as independently perceived. This being said Berelowitz is still responsible for placing the works during an installation period whereby she assesses the space and determines how they should be spaced. This decision can change the emotiveness of the group from sparse alienation to intimidating clique. It is tempting to see a work like this as wistful or nostalgic, as somehow to see each figure as static and entrenched in dire isolation, yet the proximity and fluidity of the figures, independent and yet enthral to another, provides a life-affirming study of humanity. Ultimately this emotion is highlighted by a feature of this installation whereby one of the figures is set away from the group and finished with a white bronze in contrast to the darker finish the of the others. By distinguishing one of the group from the rest Berelowitz draws attention to the individuality of each of them. 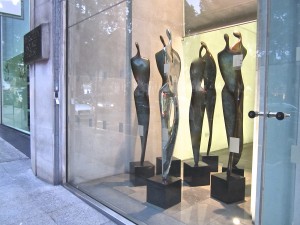 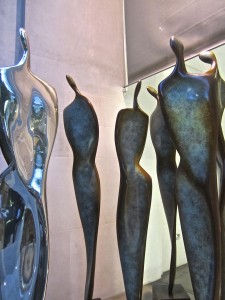 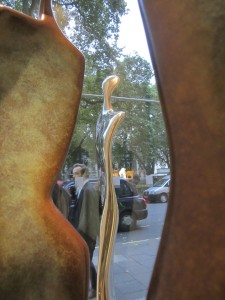 Jill Berelowitz was born in 1955 in Johannesburg, South Africa. She developed her passion for art at a very young age and studied from the age of 12 under renowned Finnish artist Karen Jarozynska and then at Johannesburg School of Art. After graduating she set up her own studio in Durban and worked and taught there until moving to London in 1985.

In London Berelowitz has established herself as one of the City’s most innovative and prominent sculptures. She has monumental works installed outside Charing Cross Hospital and at Henley-on-Thames, and has been commissioned to make the Investec Challenge rugby trophy plus works for the Goldsmith’s Guild, Unilever and Old Mutual. She has been exhibited at Sotheby’s and Christie’s as well as the RHS Chelsea Flower Show, Heathrow Terminal 5 and on Cork Street for Rado and Elizabeth Arden. Other exciting projects also include commissions for Westminster Council’s ‘City of Sculpture’ programme and for the entrance to the London 2012 Olympic Village.