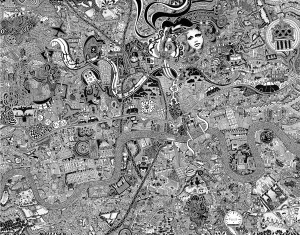 Fuller’s maps of London and Bristol have been acquired by the Museum of London, Bristol Museum and Art Gallery and the British Library. Speaking of the maps, Fuller describes them as “cartographical love letters”

It has taken Fuller 10 years to complete the London Town Map concluding in a piece which provides a wealth of painstakingly intricate information and a unique glimpse into the capital over the last decade. Fuller’s map is full of buzz and chaos including the past and present ever-changing Capital.

Speaking of Fuller’s maps, The British Library said it was “one of the most personal pieces of cartography they have ever seen”. 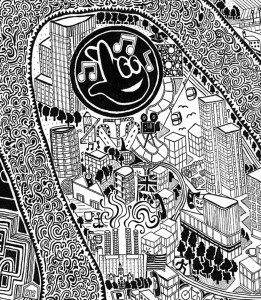 North Greenwich Peninsula -The crossing National Lottery fingers inside the Millennium Dome symbolise our hopeful attitude for the project and its unknown future. 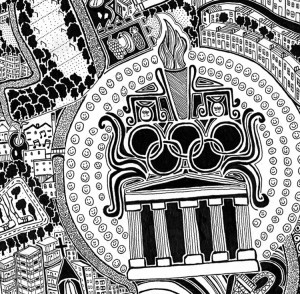 The Olympic park was drawn in 2006 to mark the excitement and possibilities the games may bring to East London. The Arcelormittal Orbit was added in 2015

These are just tiny snippets from Fuller’s colossal map which will have you standing there for hours whilst you are drawn into every tiny minute detail. “London Town” will be on display at Tower 42 from June 10th until August 2016. For any further information about Fullers maps or to make an appointment for a closer look contact info@artful.org.uk