We are delighted to be working with the Hignell Gallery for the first time showcasing the work of Johannes von Stumm in the reception of 1 Curzon Street. 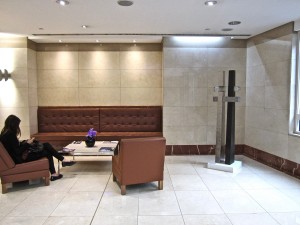 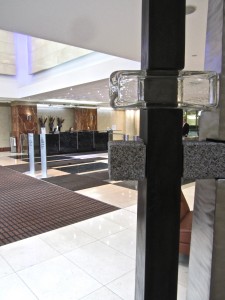 Johannes von Stumm’s unique combination of three different materials has attracted public and critical acclaim in a decade of successful exhibitions, both in the UK and abroad. His startlingly original sculpture, which engages continually with risk and a defiance of accepted laws, joins iron, granite and glass to create abstract or reduced figurative works in which apparently conflicting materials exist in complex harmony.

Von Stumm’s choice of media and instinct for experimentation is deeply rooted in his background, in a childhood and adolescence spent at the foot of the Alp’s with long winters.

On returning to the Academy, he asked for help, only to be told that the alliance of these very different materials was impossible. The challenge was irresistible: after three years of breaking glass, he finally developed a way of joining these opposing forces in an inseparable unity, a form in which inter-dependent pieces hold each other upright and are often linked as a carpenter would join two pieces of wood. Such a breakthrough has proved rich in possibilities: in fifteen years of combining metal with glass and stone, Von Stumm has expanded the boundaries of expression by fusing the strong and the fragile, the solid and the liquid, the dark and the transparent. 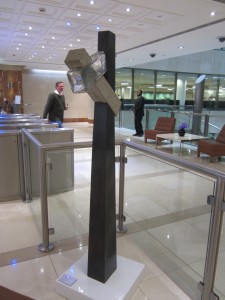 Both pieces will be on display in the reception of 1 Curzon Street until July 2016. Sculptures can be viewed by appointment or for any enquiries contact info@artful.org.uk